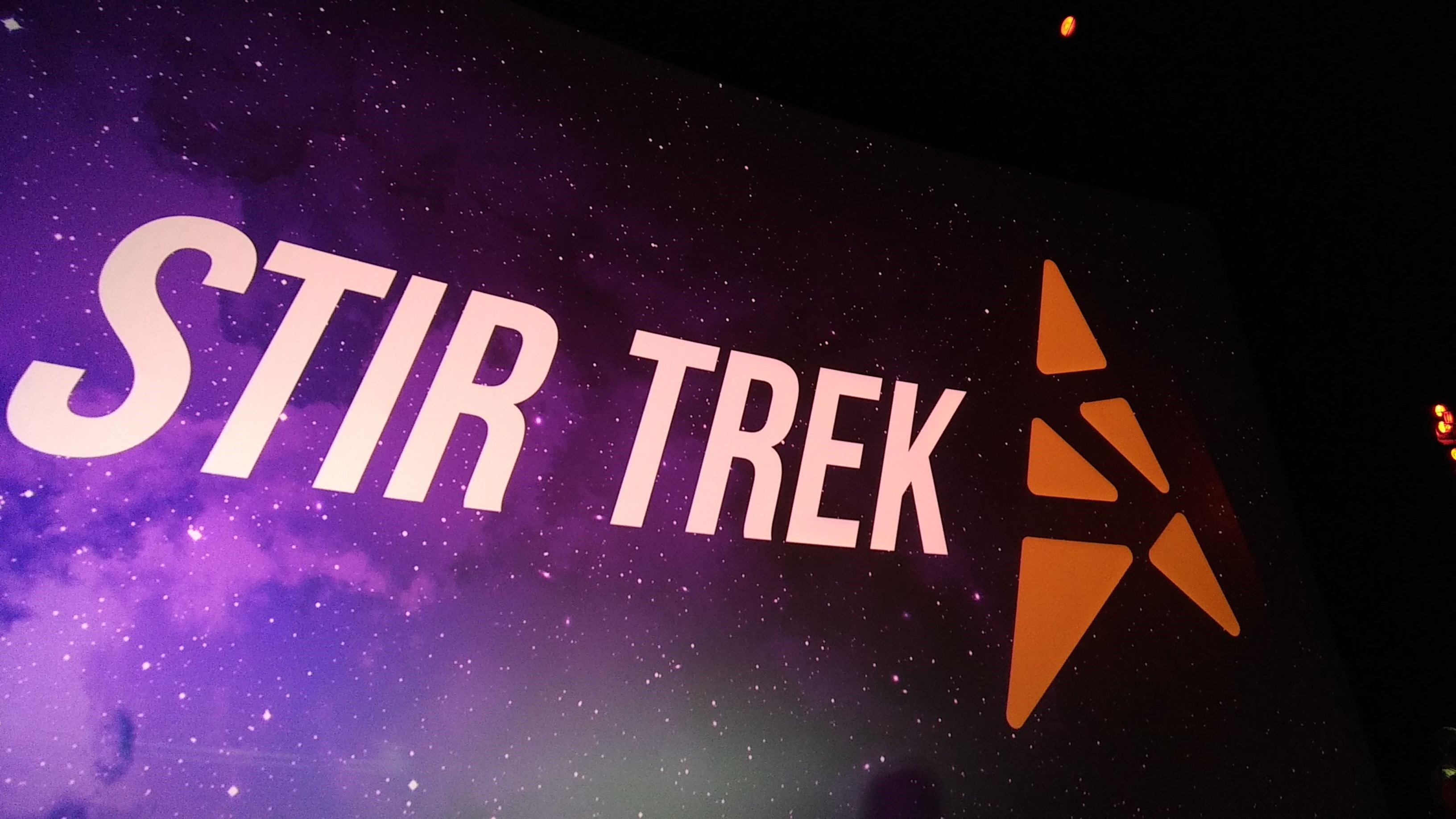 This was my 6th StirTrek and I can unequivocally say, the best. Not just my best experience, but I’m going to speak for everyone. It was the best. Hands down. The food was great, the venue was great, the speakers were great. Holy crap. Hats off to the organizers this year.

Last year was no joke a run away dumpster fire at some points. I thought for sure this year would be only marginally better. Wow, was I wrong. Happily wrong. (except for the movie, screw that ending)

Okay, let’s start with the venue.

The venue this year, was thankfully, back in the movie theater. I’ve said more than once, one of the best things about StirTrek is that it’s located in a theater. Each year I attend DefCon, DerbyCon, StirTrek and various other conferences around the country.  My favorite venue of all of them is StirTrek. 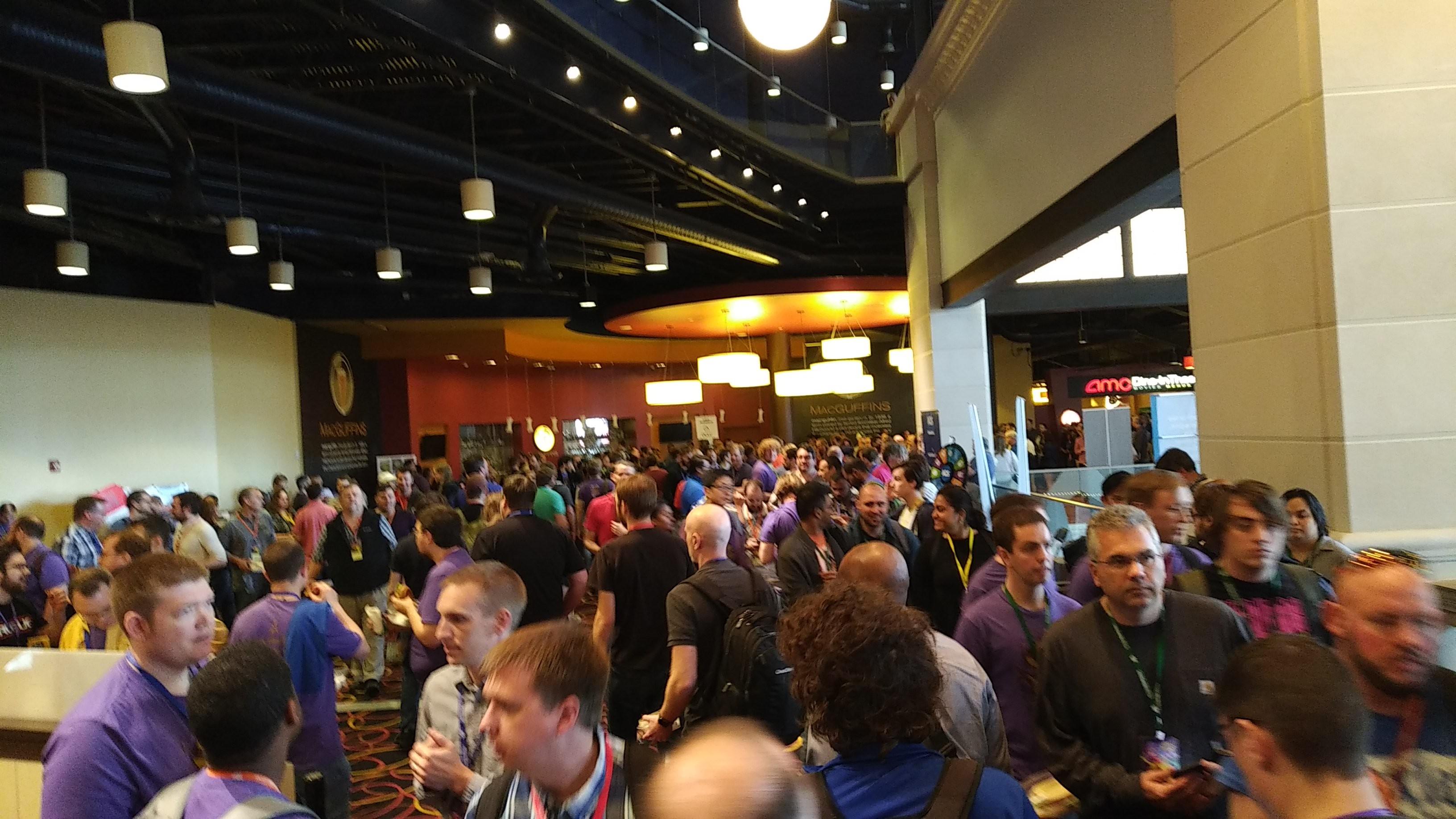 Usually conferences are held in hotels and they’re alllllll the same. Great speakers, crappy seating. Smelly old guys jammed into a hotel meeting room, entirely too close to one another, listening to someone drone on with a death by powerpoint presentation. StirTrek however, is great because you get seats that are evenly spaced, and made to be sat in for extended periods. Not to mention, you get a GIANT screen to read slides from. The theater has been and continues to be, the most genius part of this conference. 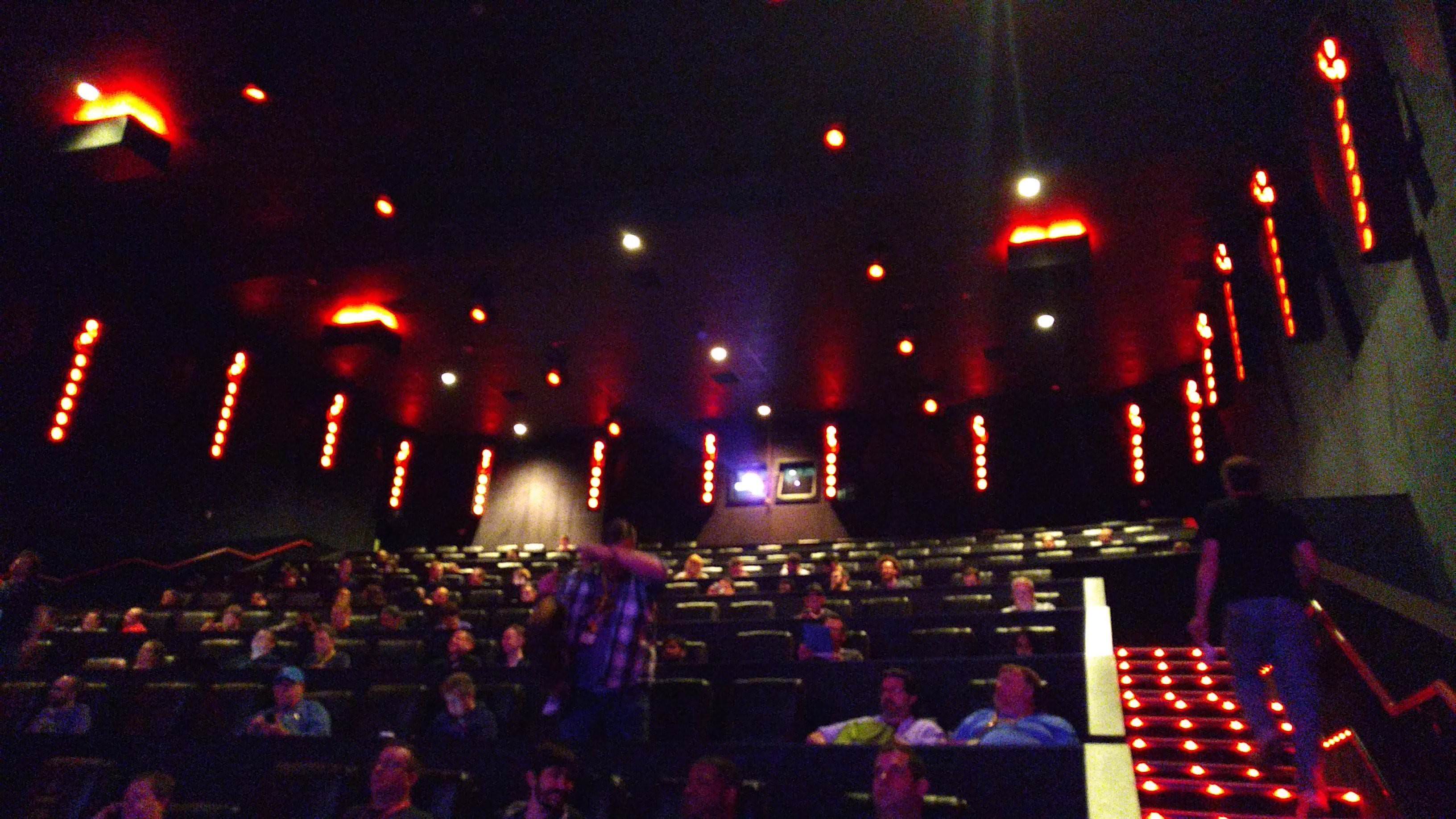 Next up is the food. Once again, another home run. The food was once again much better than previous years. As I mentioned in last years review, the food now is top notch. In the past we got jimmy johns and it felt a little cheap honestly. The meals that they provide now, I’d honestly be happy eating daily. They provide delicious healthy options. Whomever is organizing this, please keep it up. 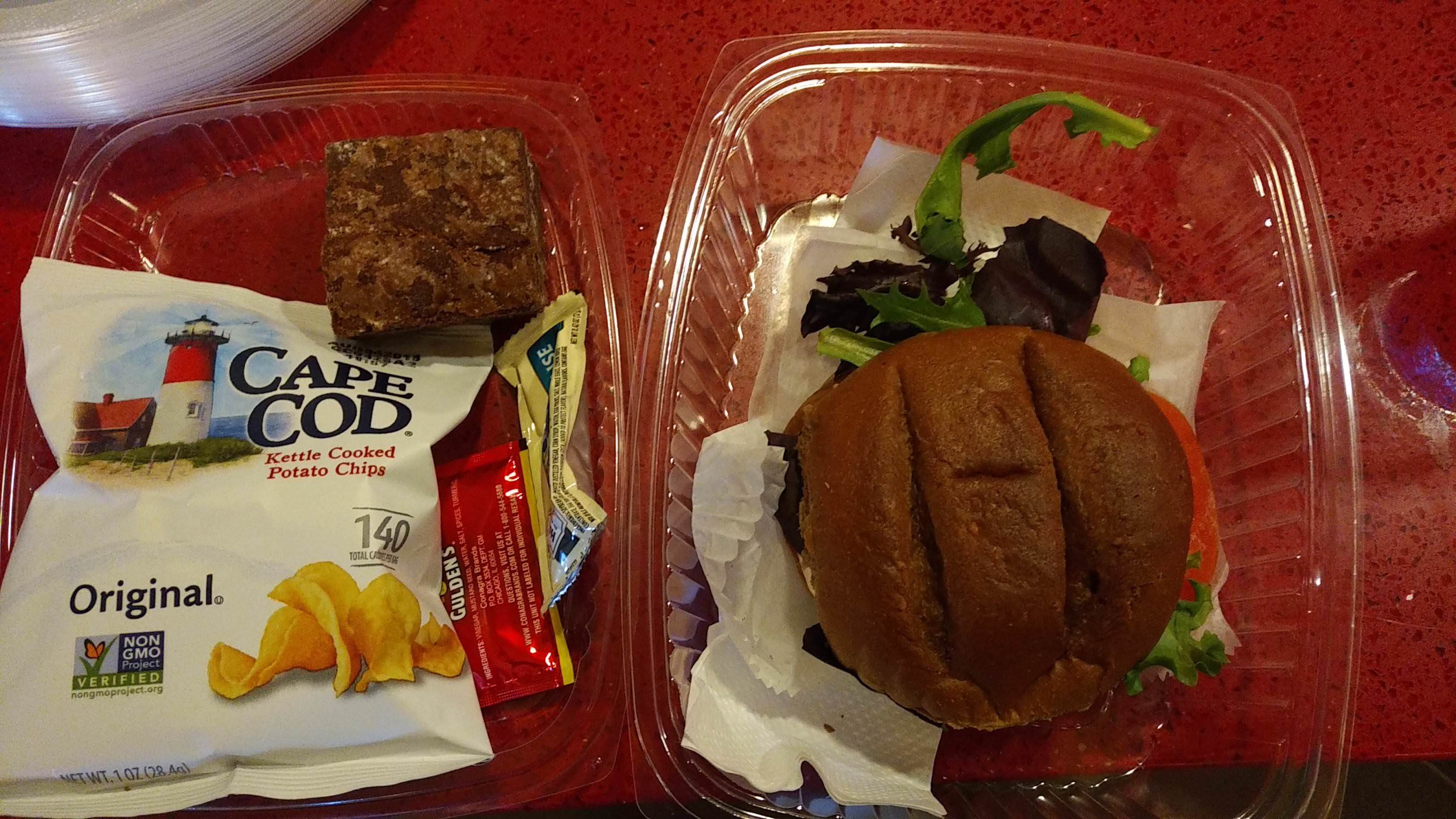 If I had to gripe about anything, it would be that I didn’t know where the food was going to be positioned. It took me a hot minute to find some and by the time I had gotten there, the table was starting to run low. That said, I still had my pick of whatever I wanted, I just could tell that it was getting low. If I had to place a bet, I’d bet that there were people that didn’t get an option because they couldn’t find it in time.

My only other gripe would be that it was limited areas to sit outside the theater and that it felt cramped. Maybe in the future, if the venue doesn’t change (please don’t change it) people could be directed to more open seating areas? I’m not sure. I’d take those complaints with a huge grain of salt. I can’t stress enough how awesome the conference was overall. 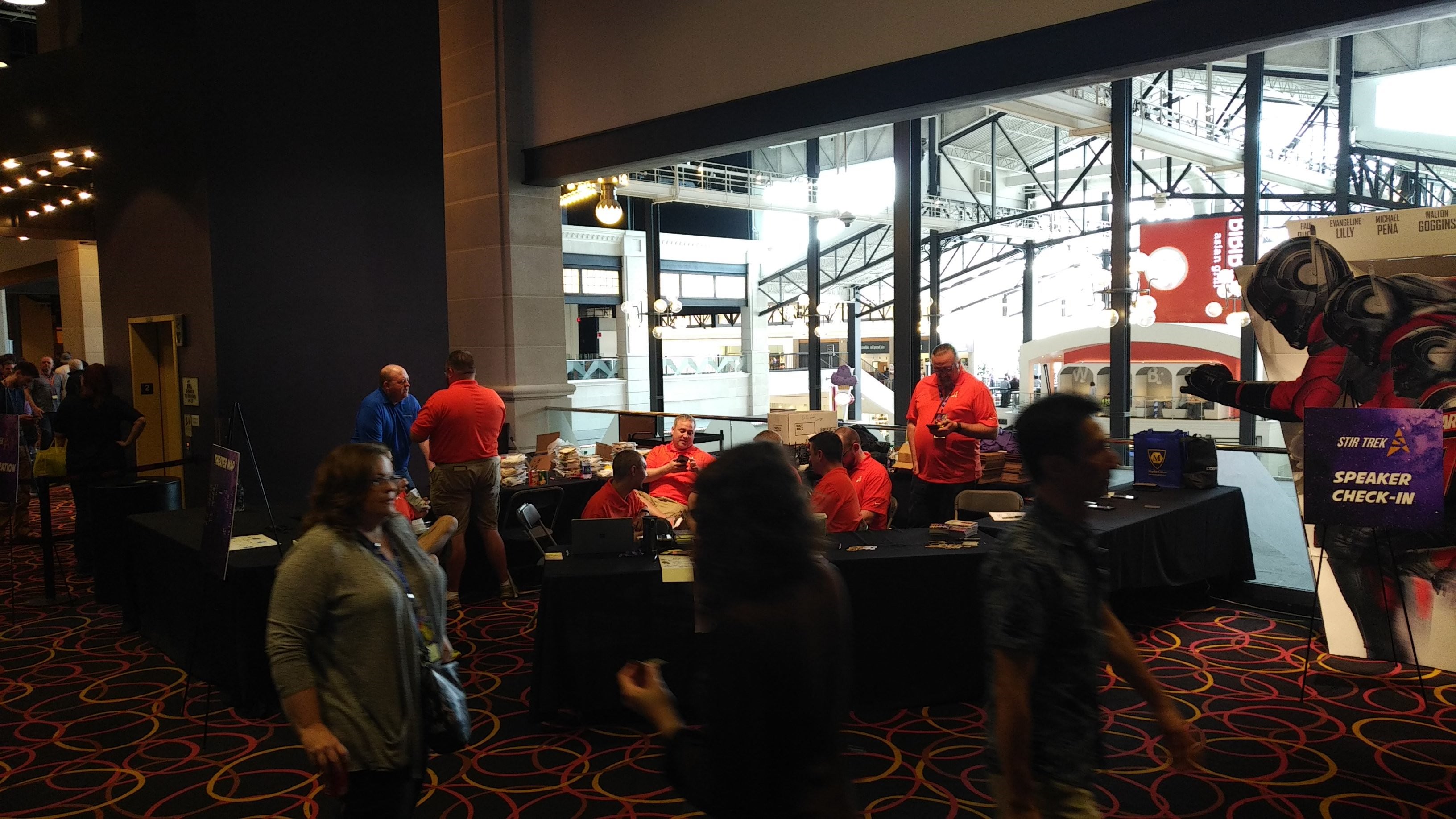 Some other generic notes that I took during the conference were: 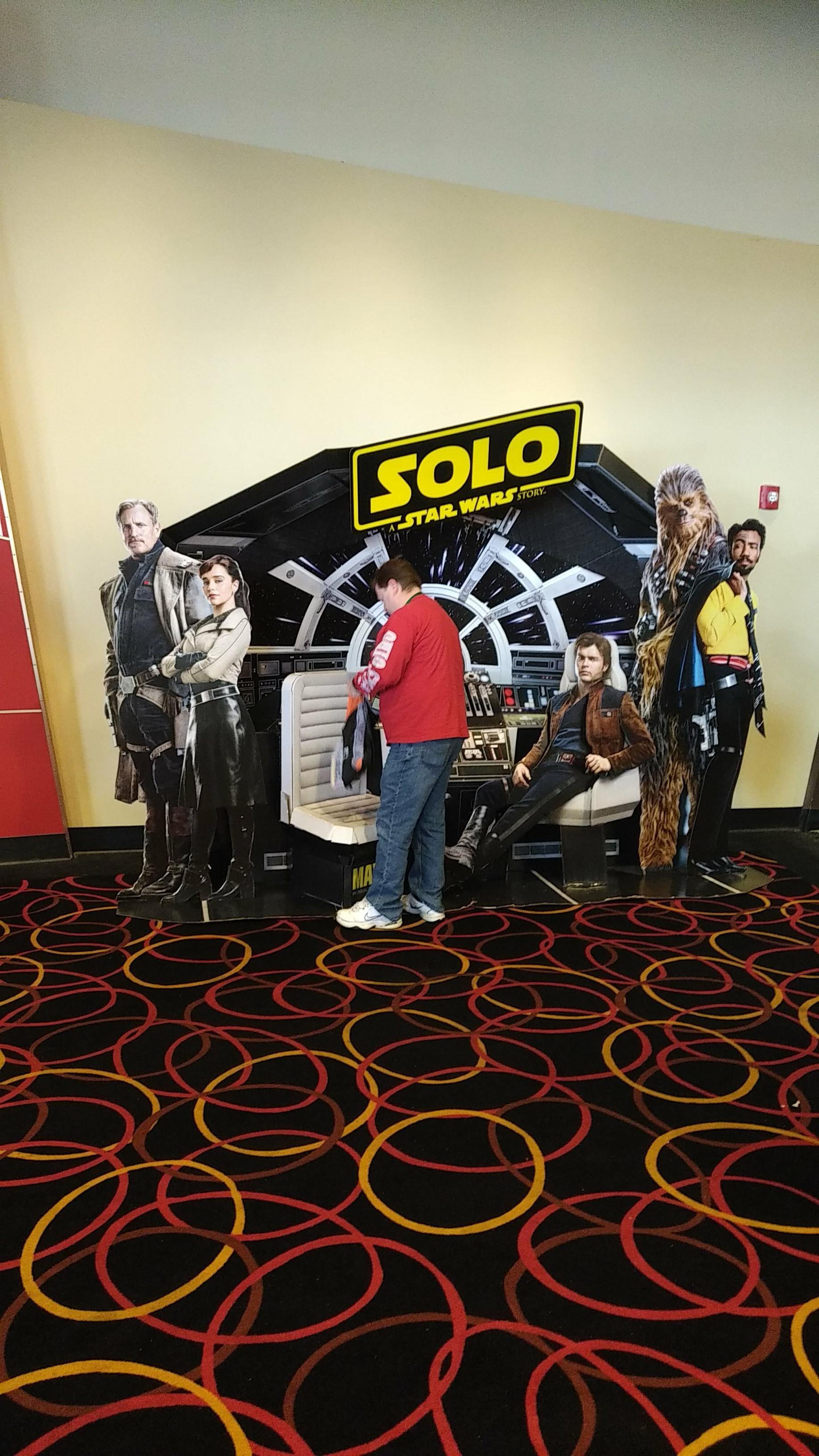 Also, another positive thing, two of the sessions I attended were very technical. So technical in fact that I couldn’t take notes that were intelligent enough for a blog review. I love technical presentations because you get to see practical examples. This was great to see this year because in the past it seemed that all the presentations were a mile wide and an inch deep. This year however we had some great in depth sessions and it was awesome to be there to see them in person.

So all I can say is excellent presentations by Tim hoolihan and Denis Dunn. You both had great sessions. I’ll have to go back and rewatch them a few times so I can fully consume what you were presenting. Unfortunately my brain hasn’t leveled up enough yet to consume what you said in that short period of time haha 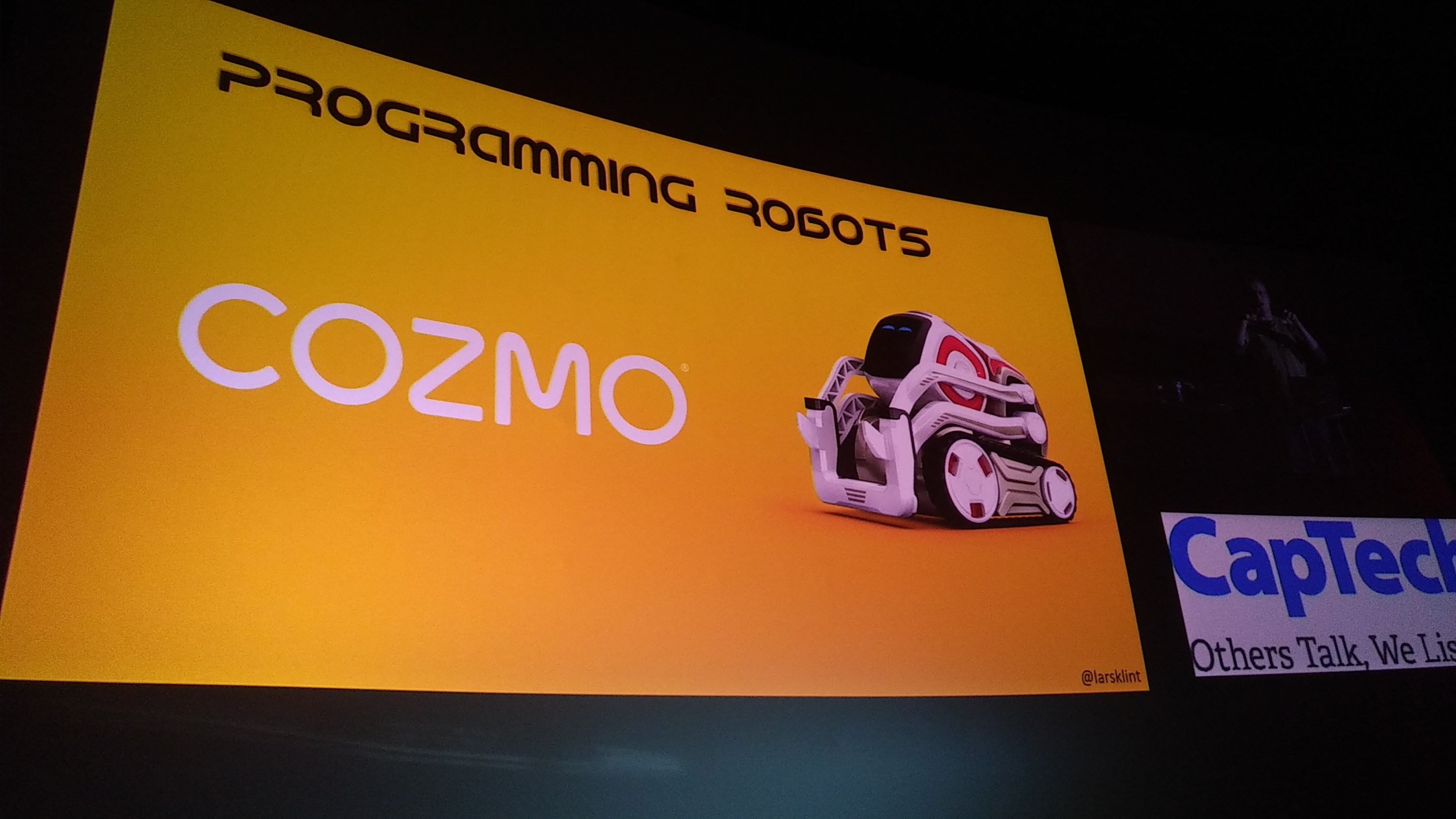 Okay on to the presentations that I was actually able to make sense of. The first one that I really loved was Lars Klint’s presentation on his Cozmo robot. If you spend more than a few seconds on my blog or twitter feed you’ll see that I love hardware. I especially love programmable hardware. So naturally when I saw programming a Cozmo robot I had to check it out. 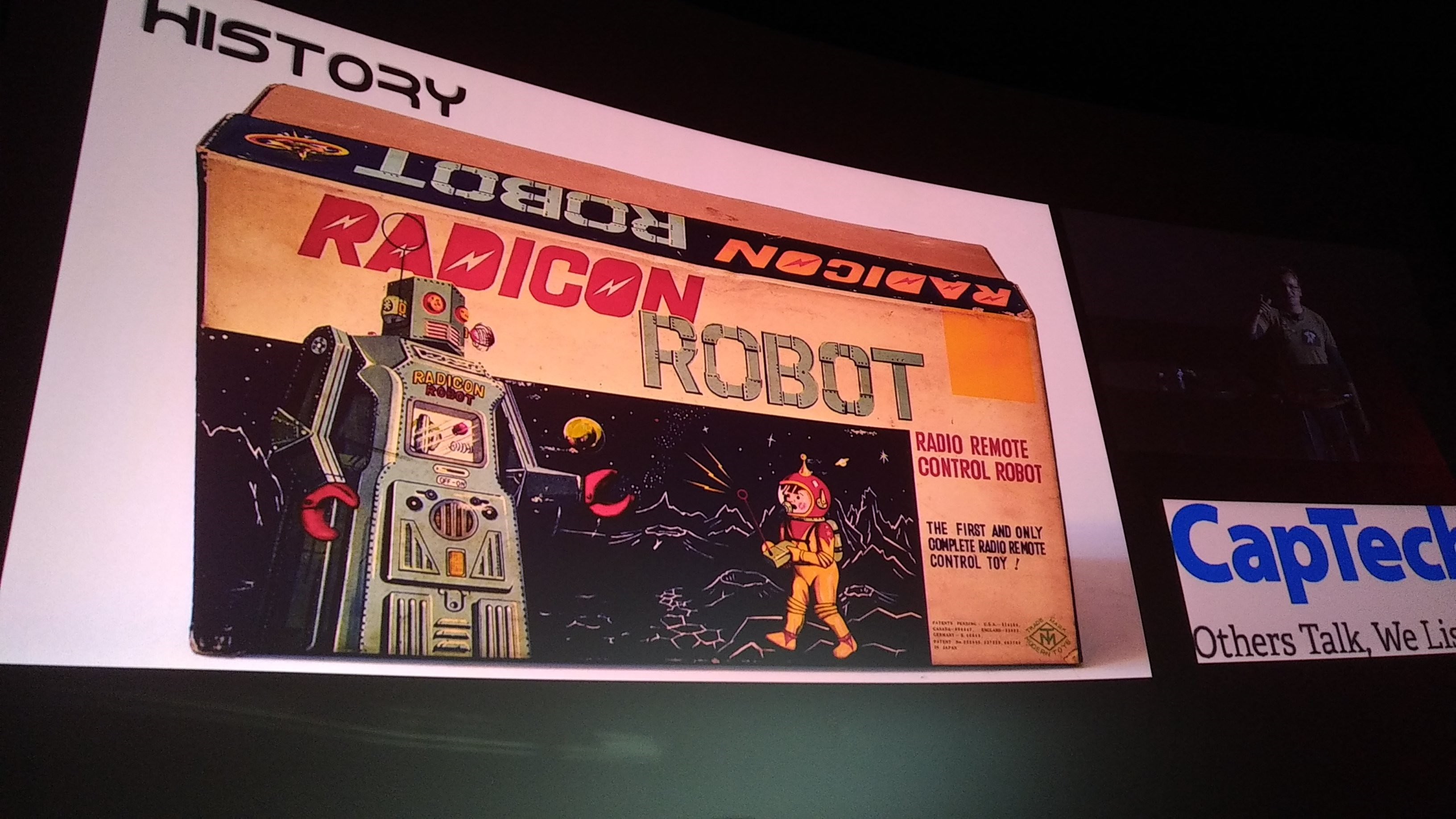 Lars started out with a brief history of robotics which was cool to see. Often when people present at conferences there’s no foreplay. You have to warm up the crowd before you dive into the material at hand. Lars did a great job of warming the room up to his topic before jumping into it. 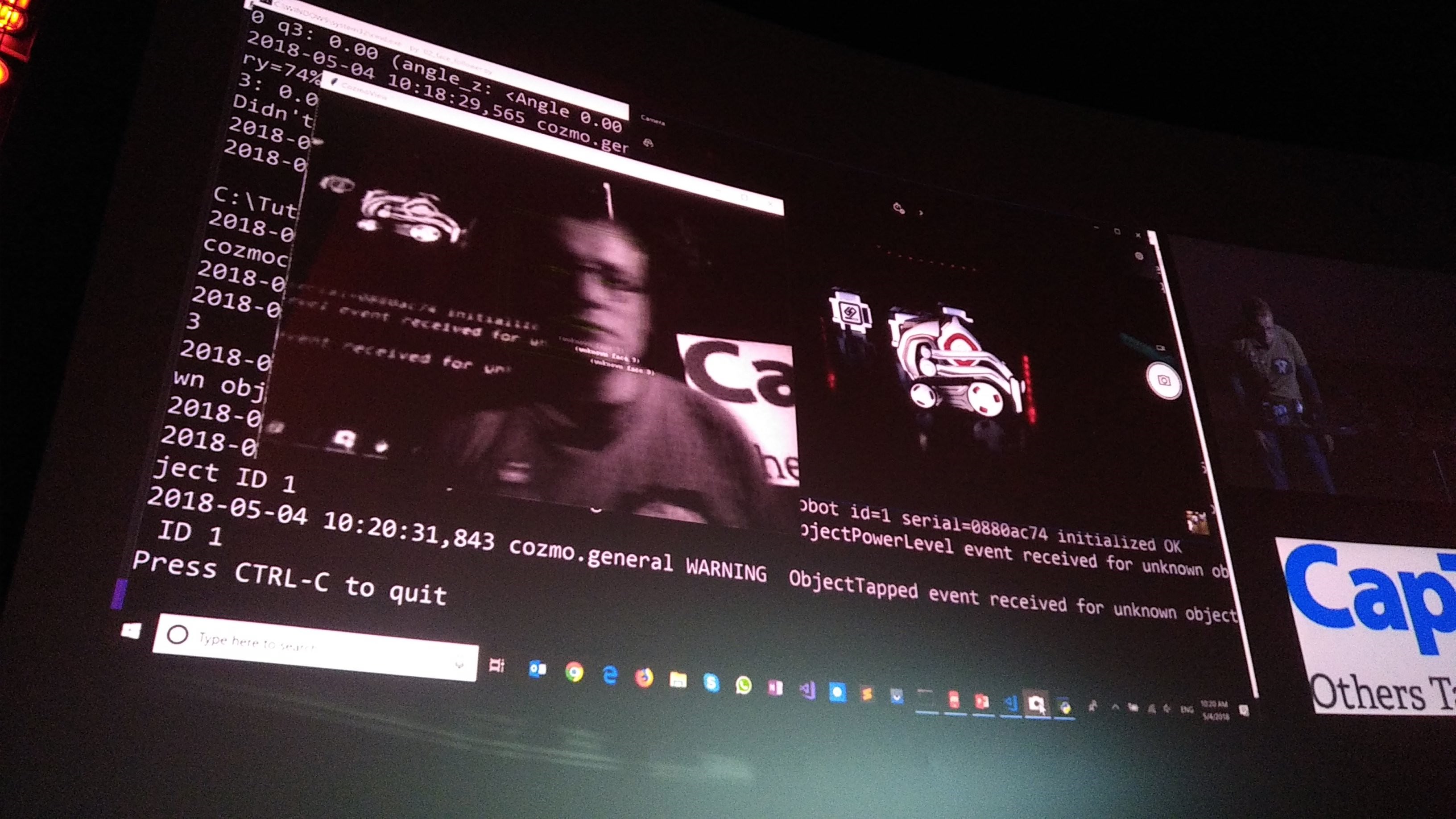 During the presentation he covered lots of different things about the Cozmo robot. He showed some basic code examples which seemed pretty straight forward. I have mixed feelings about demoing code at conferences. It always seems so clunky no matter how it’s presented.  I’d say Lars did about as good as you could with code on stage. It is what it is.

That said, the demos were awesome. I particularly liked the facial recognition demos. Something about robots identifying humans is interesting to me. Just don’t give them guns….

Overall it was a great session and I look forward to hearing him speak again. 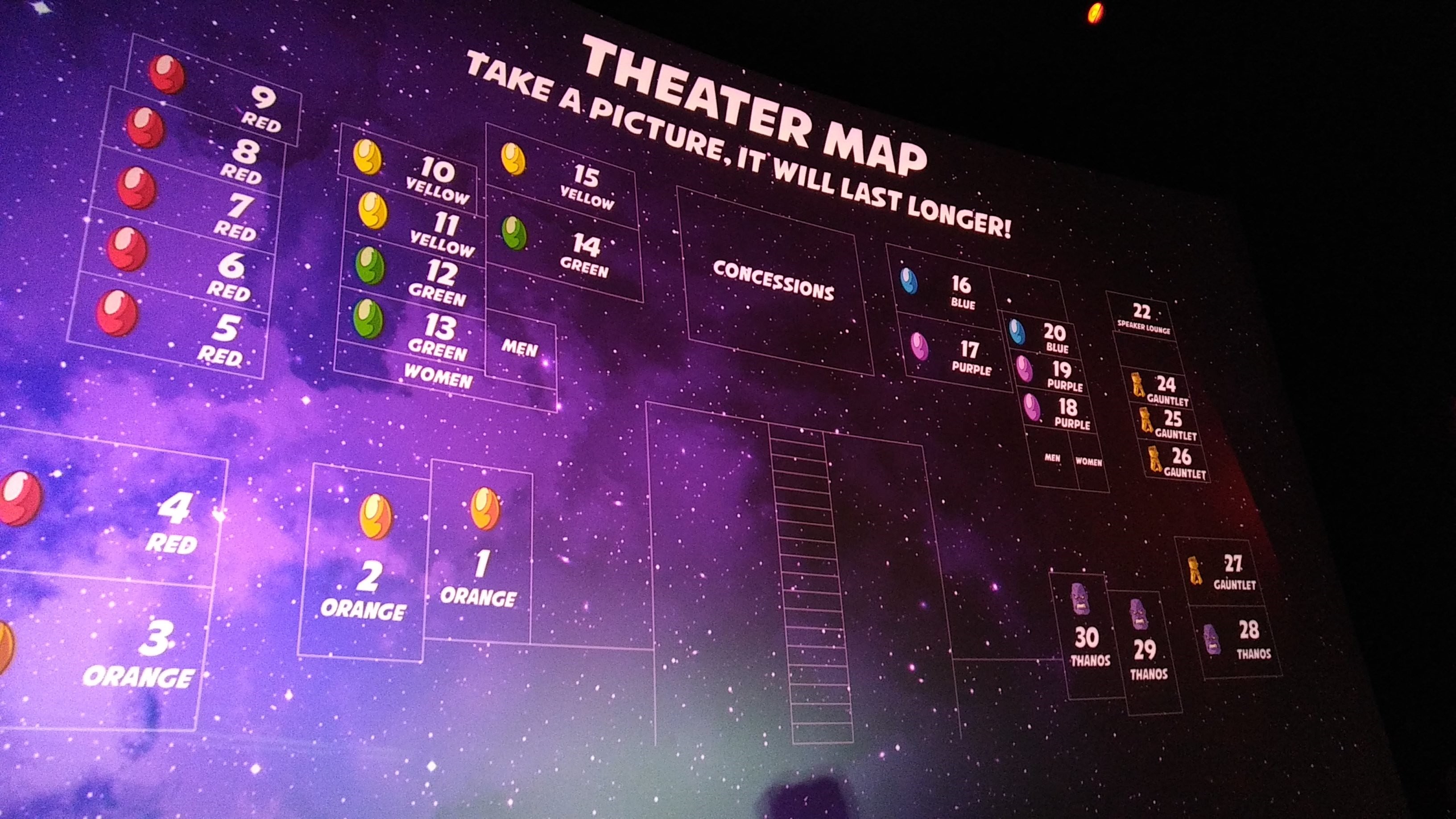 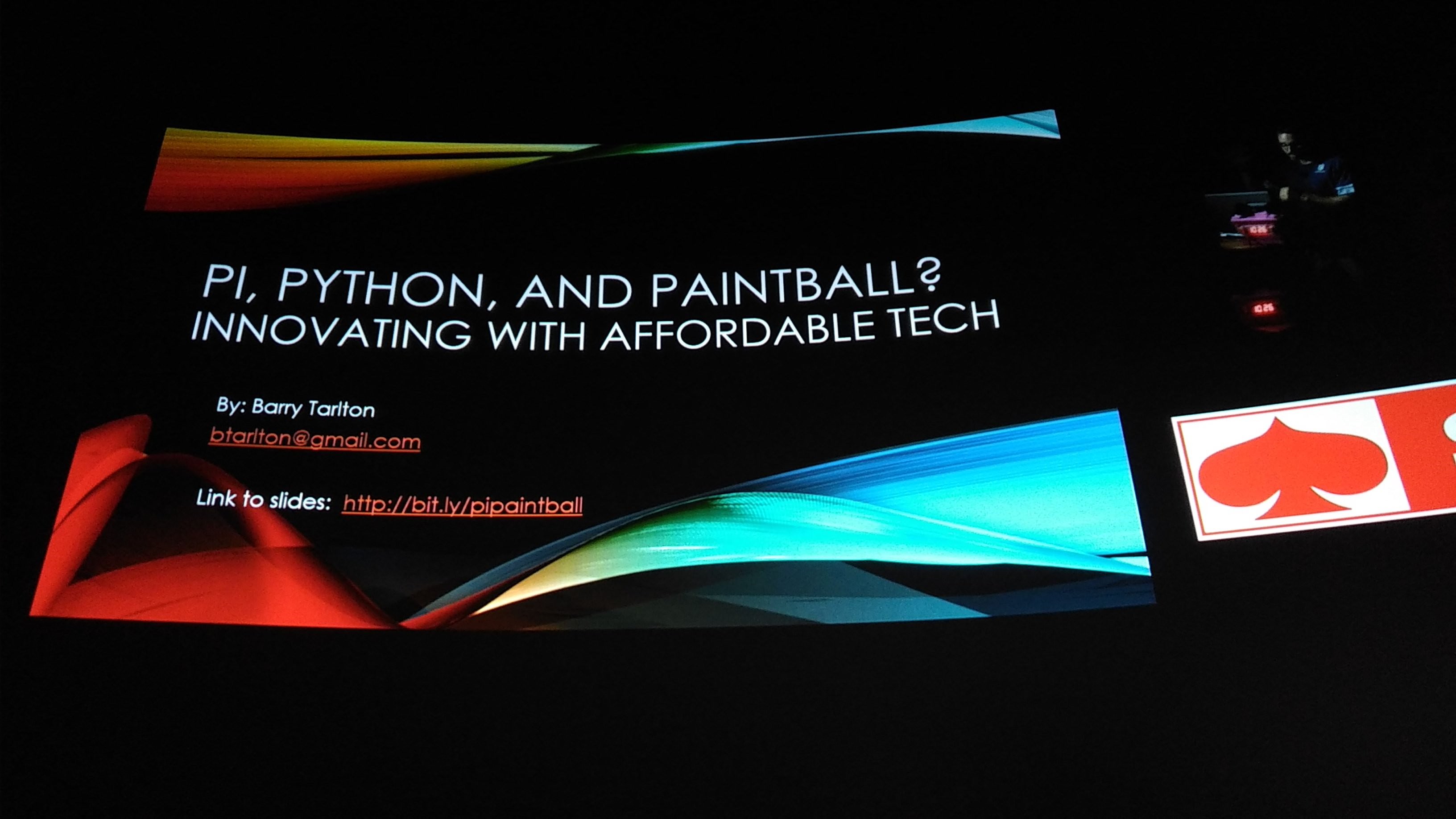 Another great session that I managed to make it to was by Barry Tarlton. Like Lars’ session, Barry’s was a hardware talk. I got to speak to Barry in the hall after his session and I told him that I actually got into working with Arduino because of a session I saw at my very first StirTrek in 2013.

Unlike all of my hardware projects, Barry managed to make something useful. He came up with hardware that he was able to use on the paintball field and also during local plays. 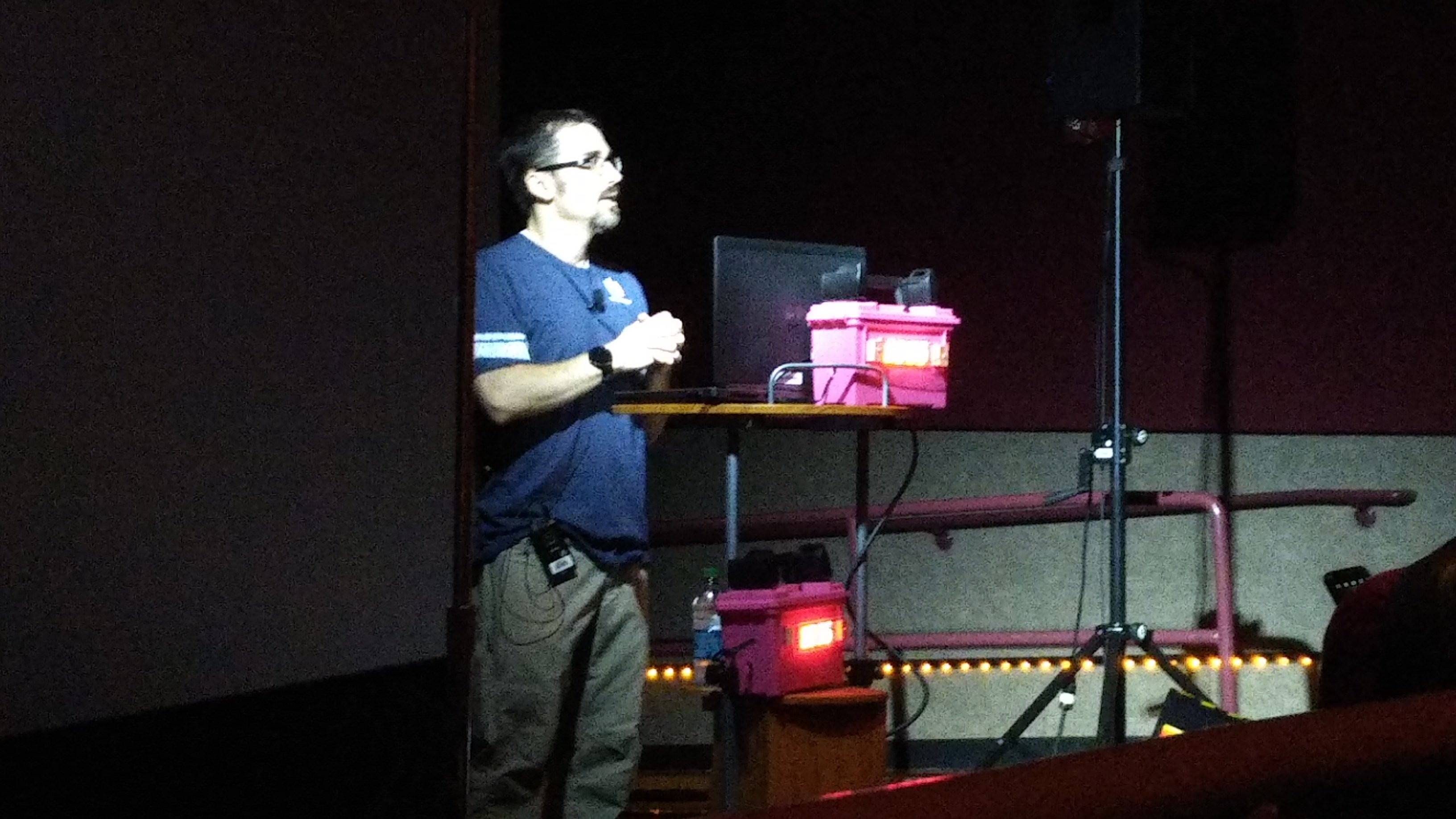 During his presentation he showed his thought process on creating motorized stage decorations which I thought was very cool. It was fun to see someone else face the same issues that I do when I look at my projects. He spoke about how it’s difficult at times to debug hardware (which it totally is) and also how finding practical examples and documentation can be hard. These are both things that I’ve faced a ton of times, so it was good to see that it’s not just me. 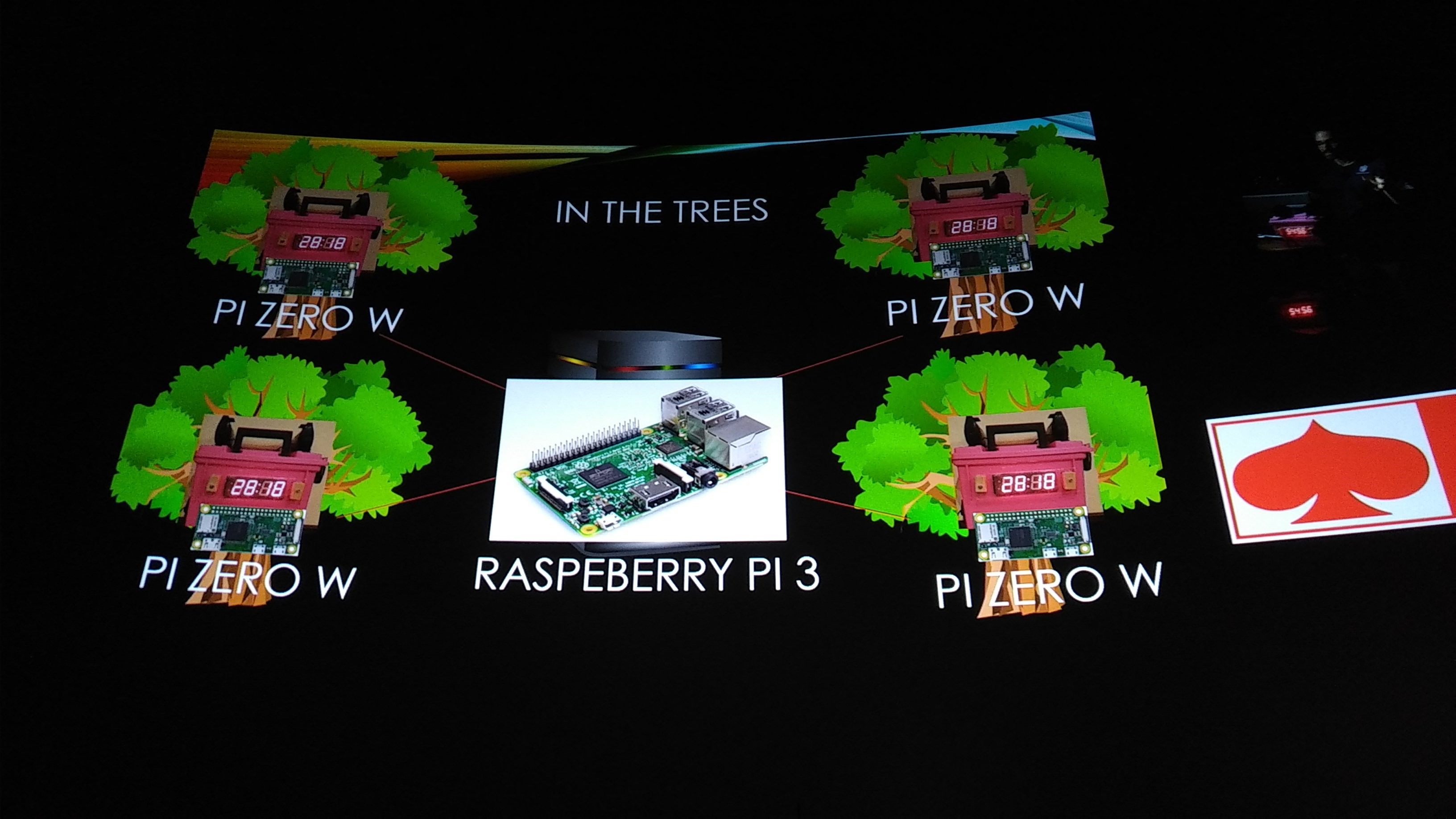 I was particularly interested in his solution for his paintball game. This showed a mastery of a number of great skills. First, just designing the hardware is something that would make a lot of hobbyist crumble. Not only was he able to design the hardware, but he managed to make it deployable to the real world, durable enough to last in inclement weather and also wirelessly networked and synced using his own protocol. Any one of these tasks would have stopped a lot of projects so great work on his part.

If you get a chance and you’re a Counter-Strike fan, make sure to watch his talk. An added bonus to his paintball timers was that he also made a CS themed game mode with planting a bomb which was AWESOME.  I loved both CS and paintball growing up. We would have killed for this setup. Once again, great job to Barry, I look forward to seeing more of his work. 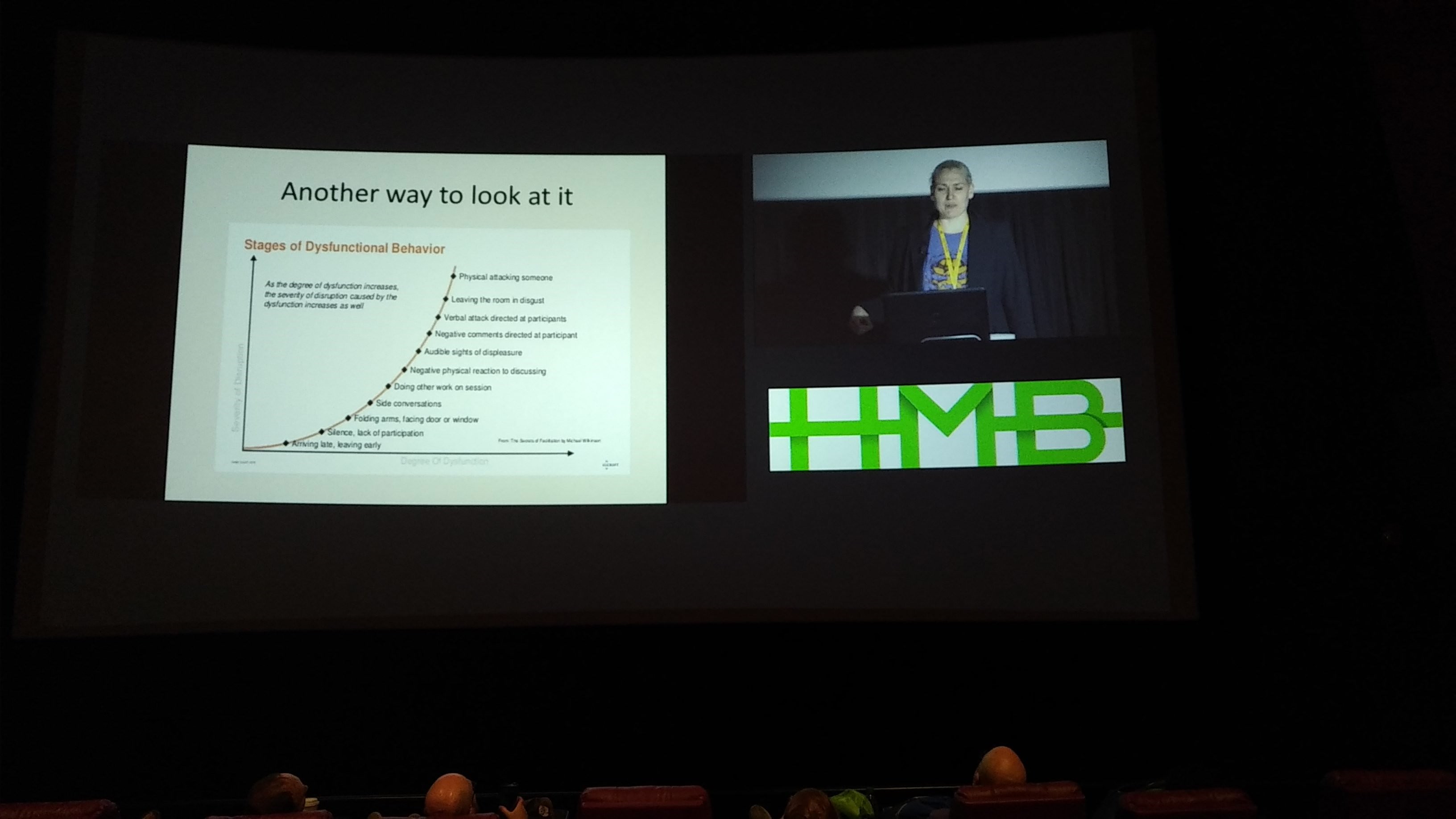 The last talk I wanted to highlight from my time at StirTrek was Kim McGill’s talk on “How to Make a Dysfunctional team Function without Resorting to Death and Dismemberment”. I apologize for not having better photos but I wanted to try out watching a talk in a theater that it was being broadcast too. The broadcast was great but it was crap for photos.

Every year I look forward to one speaker that’s charismatic and easy to listen too. This year that was Kim. I always try and aim for sessions that have nothing to do with what I do professionally. It’s how I grow. So this year I added one for team building. Kim didn’t disappoint.

Kim gave some great examples of teams that she’s worked with in the past and how they interacted with one another. Now, for those that don’t know, I was in the Army for a little over 5 years. We had some pretty savage teams. I can say though, that we never, to the best of my knowledge, had some arguments like Kim described haha 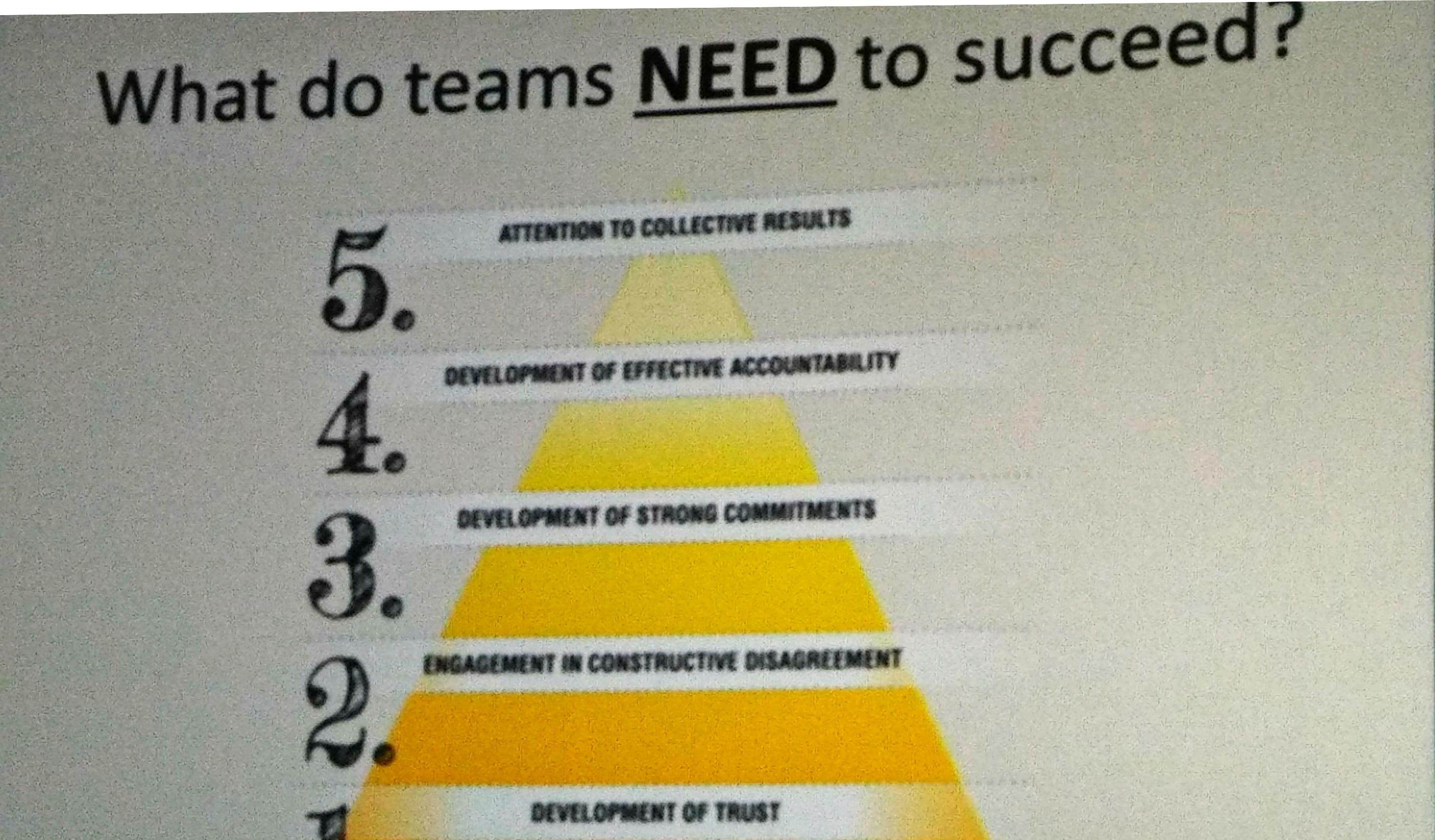 I think the biggest thing that I took out of Kim’s session was the story about a guy who tended to overtake meetings. I think she said she made him start speaking at the end because he would suppress other ideas in the room. This really stuck with me because years ago, I was this guy. No one ever called me out on it and who knows how many meetings I wrecked. Thankfully I came to this realization on my own and started doing exactly what she recommended. Which was shutting up and letting others talk haha. 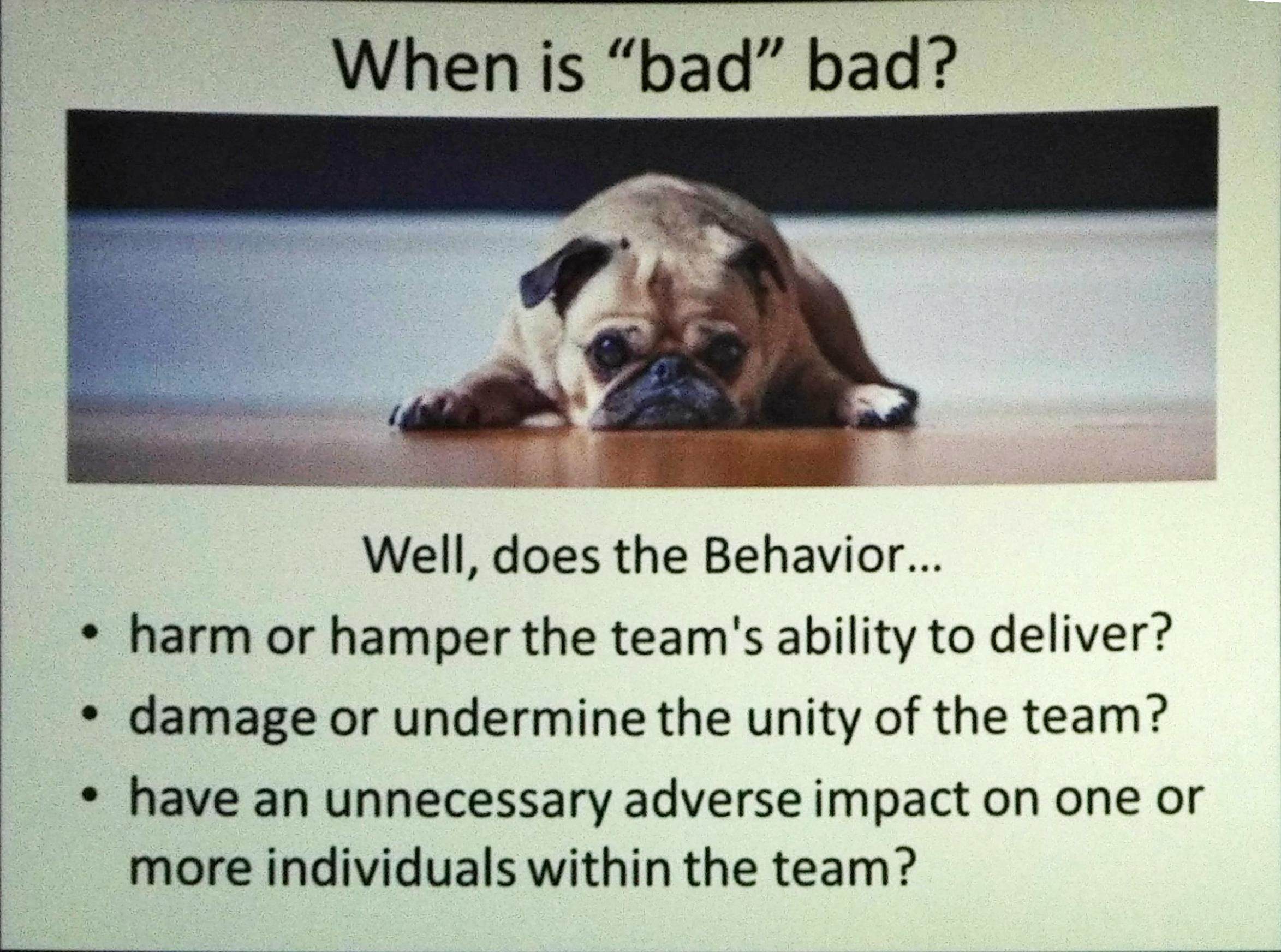 Kim gave some great information in her session and it made me wish that I had the opportunity to work with her. She seems like she’s a great leader. Managers are a dime a dozen. Leaders are few and far between. Great leaders are unicorns. Keep up the good work Kim. Hopefully I can see you speak again next year. 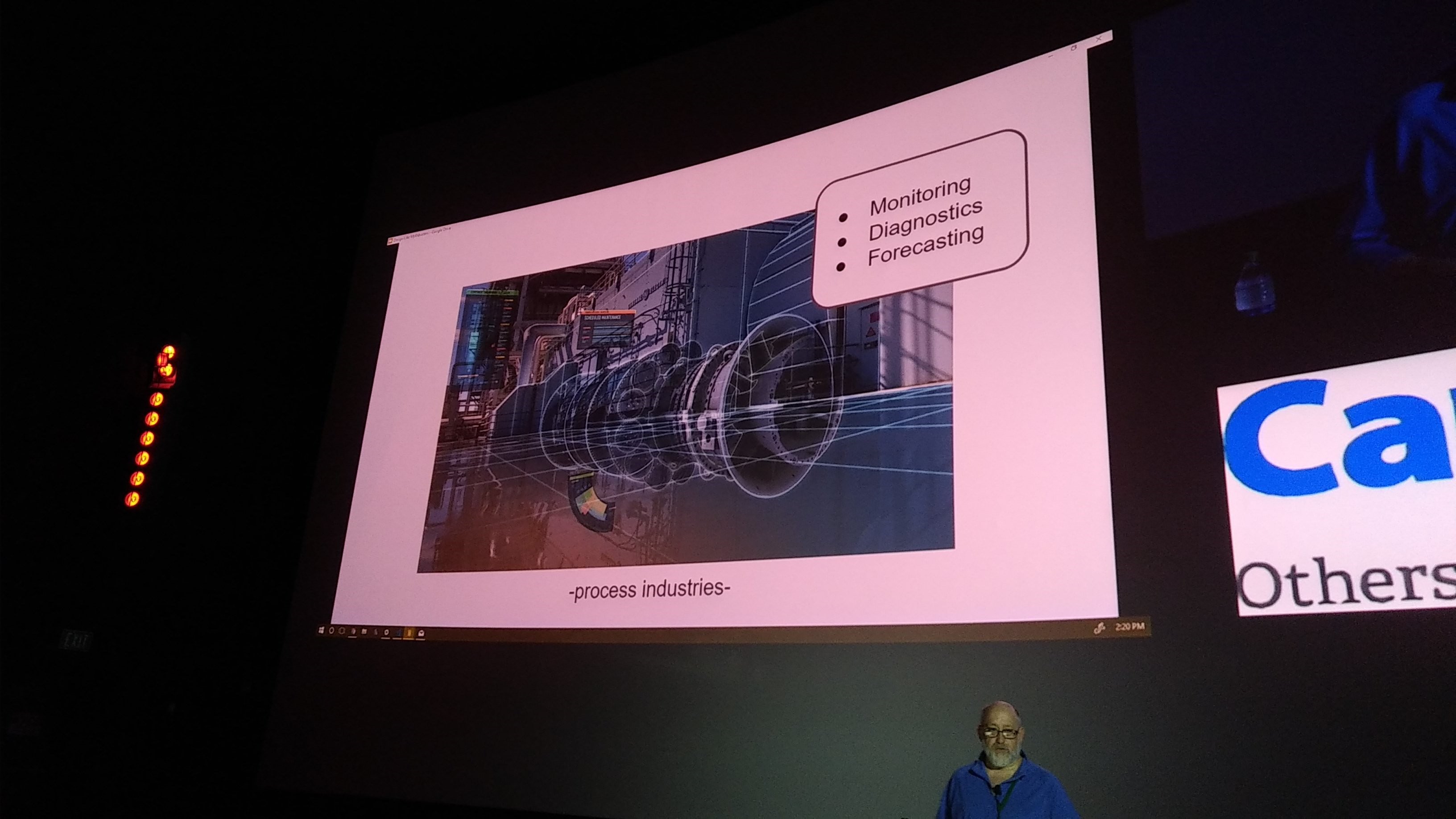 Well, that’s all I have for this year! I swore up and down if this year was another shit show that it’d be my last StirTrek because the prices keep seeming to go up. That said, I can’t wait for next year. Excellent work to everyone involved once again.

See you all next year! 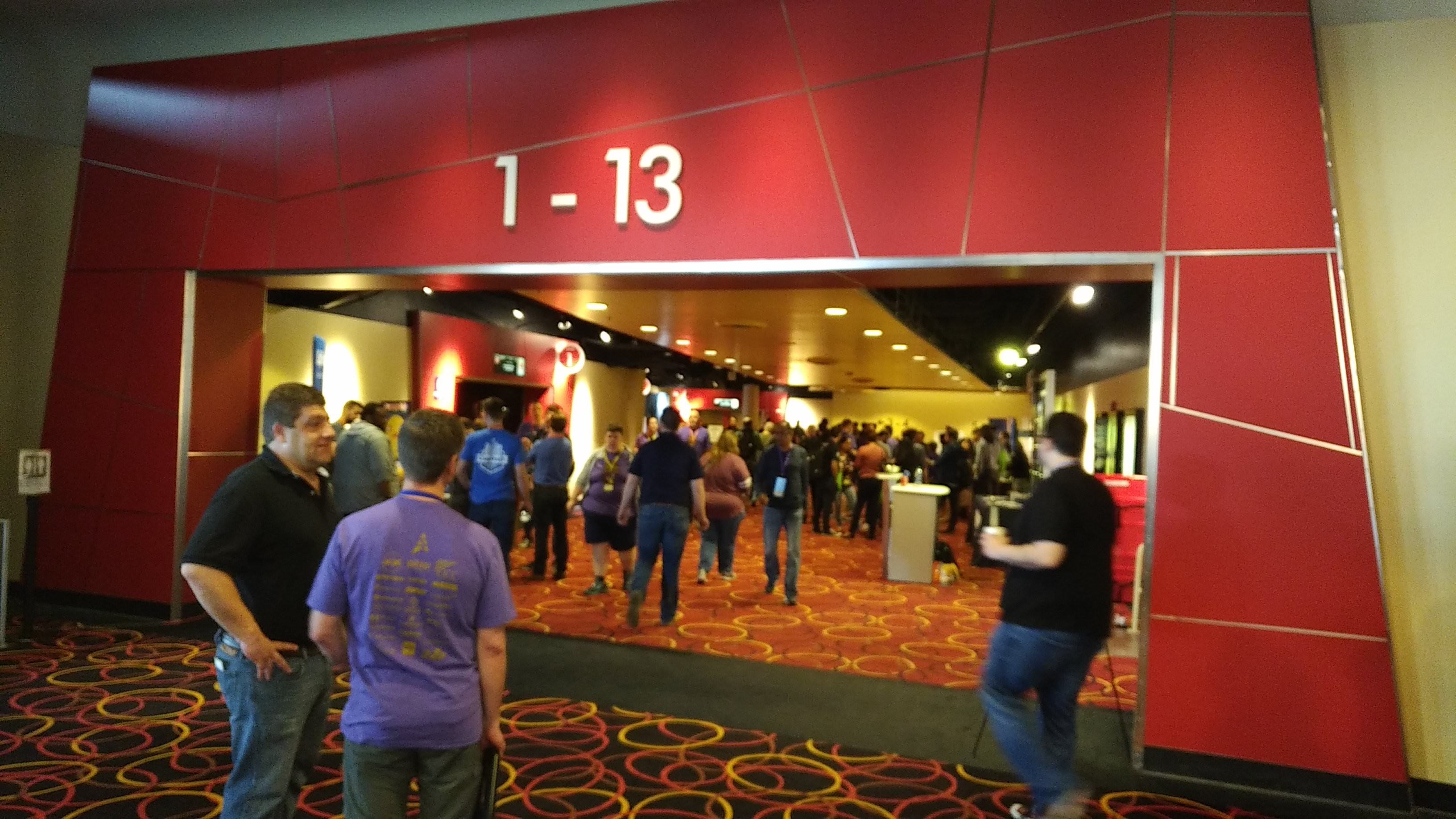